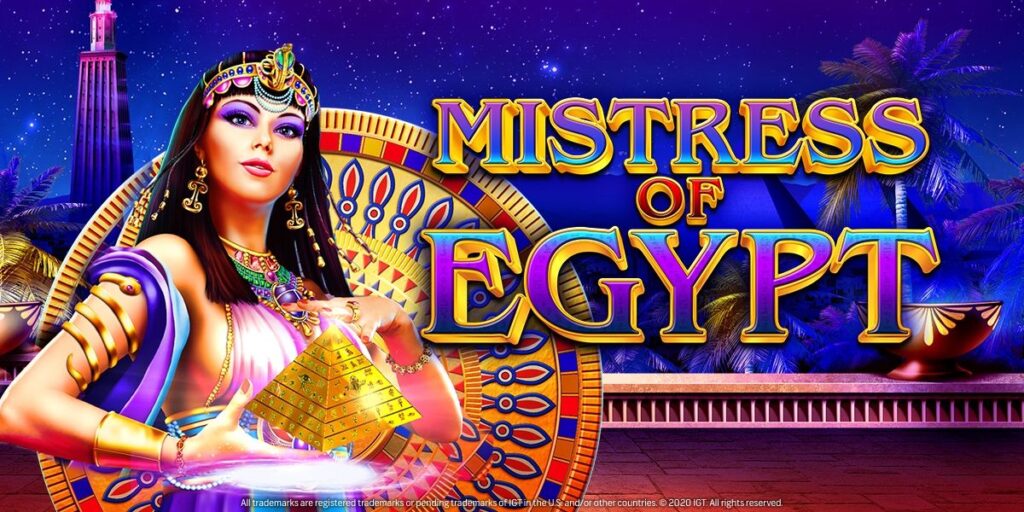 IGT adds an incredible progressive jackpot network to an existing slot machine with Mistress of Egypt MegaJackpots. The actual game is based on older games that have been in their collection for years, but the addition of the progressive jackpot bonus may entice some players to give it another shot. The concept and design are based on the popular Ancient Egypt theme, featuring a lovely Cleopatra in the starring role.

The configuration for Mistress of Egypt MegaJackpots is normal for a modern slot machine, with 30 paylines on 5×3 reels. I wouldn’t anticipate much from its standard spins, which only pay out up to 200x the stake, but the progressive jackpot or the special feature’s payouts of up to 1,000x the stake could be more appealing. There are stacked symbols, Pyramid Wilds, Diamond Bonus symbols, synced reels, and free spins in addition to the MegaJackpots bonus game.

When compared to other games, it is more expensive to begin started with. The lowest stake allowed is $0.60, while the maximum wager allowed is $600.

The MegaJackpots progressive jackpot (which resets at $500,000 but can be much more lucrative) is the most tempting prize in this slot machine. It is triggered by its own random characteristic, which has the potential to pay up to 1,000x the investment.

The normal side of the game, on the other hand, is faring much worse, with regular combos yielding awards of up to 200x the stake.

When you consider how much risk you’re taking in a very volatile release, the profits don’t appear to be that good. The RTP for the standard side of the game is only 89 percent, but it jumps to 92.50 percent when you include the progressive jackpot element. In any case, the returns are far too low.

Because the image of the Golden Pyramid is accompanied by a blue Wild emblem, the appearance of the wild symbol in this game is clear. These symbols should be utilized as substitutes wherever possible, but their abilities are limited to ordinary symbols alone.

The MegaJackpots Bonus Game logo serves as an additional wild symbol. This is a substitution that cannot be used to replace bonus symbols.

A Random Wilds feature can appear at any time during paid spins. 3 to 15 normal Pyramids will be added to the reels. One to five of them can convert into MegaJackpots Bonus Game wilds if there are at least five.

Another feature in this game is Synchronized Reels, which relies on stacked symbols of the same type landing on many reels at the same time. Stacking is only possible with normal symbols.

You can only enter the MegaJackpots Bonus Game if you get 5 of its special wilds on the reels at the same time as the MegaJackpots Bonus Game logo. You can acquire them during free spins or through the Random Wilds feature. This feature provides you one spin on a special set of reels with fixed jackpots ranging from 2x to 1,000x your wager, as well as a progressive jackpot.

In Mistress of Egypt MegaJackpots, there are also free spins.

When three to five Diamond Bonus symbols appear anywhere on the slot’s reels, you’ll be awarded 10 to 75 free spins.

Ancient Egypt is one of the most popular slot themes in the business, and it was this subject that inspired IGT to create the original Mistress of Egypt, as well as all other titles in this series. The graphics are a little old, but not too much. Cleopatra stands next to the reels, her height equaling that of the playing area, while a city and the pyramids are further away.

The symbols from J to A are of little value, and the next ones depict Bastet, Horus, Anubis, Ra, and Cleopatra. The Pyramid Wild, MegaJackpots Bonus, and Diamond Bonus are among the feature symbols that will appear.

Although Mistress of Egypt MegaJackpots doesn’t contribute much to the franchise, the progressive jackpot may persuade some players to give it a try. I wouldn’t suggest it, primarily because of the low RTP, even after factoring in the jackpot’s contribution.