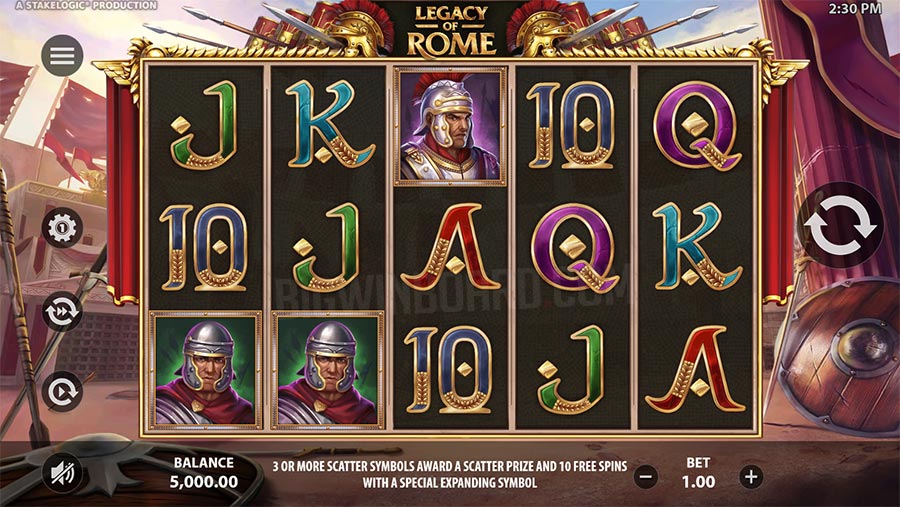 Stakelogic has just announced the release of Legacy of Rome. The slot’s concept was inspired by Ancient Rome, while the mechanics were based on the Book genre. The outcome is a game that is familiar in many respects, particularly in terms of gameplay, but the choice of Roman-themed graphics is unusual for the Book genre, and that may attract some players who might not otherwise consider it.

On the 5×3 reels, you’ll find the standard 10 lines. This category is also known for its strong volatility and 5,000x top jackpot. The 95.60 percent RTP, on the other hand, is lower than many other Book-style slots, so that’s already a disadvantage. There are features such as mixed wild/scatter symbols, as well as free spins with special symbols (expanding ability is added to them).

Wagers start at just $0.10, and the gambler can work their way up from there. The maximum stake per spin for these bets is $40.

We can compute that the slot’s luckiest players might win up to $200,000 based on the wagers that can be made and the payouts of up to 5,000x the stake that have been announced. To enter the free spins, you must first select the top paying symbol to make it special, and then it must appear on all five reels. It’s not impossible, but it’s also not very likely that everything will fall into place.

With these slots, you do take a risk, as Legacy of Rome’s extreme volatility demonstrates. You also have an RTP of 95.60 percent, which is less than the 96 percent that I prefer to see. Many other Book slots go higher than that, giving you better odds even if the graphics aren’t as nice.

The features in Legacy of Rome are similar to those found in most Book slot machines. As a result, the main feature sign serves as both a wild and a scatter symbol. They can be used alone or in combination with other symbols to produce regular winning combos. Because they’re also scatters, they only appear once per reel.

You obtain a special symbol, picked at random from the usual symbols, as soon as the free spins begin. When this symbol falls on the reels, it gains the potential to expand. It occurs at the end of the round, and if it appears on three or more reels, it will seize control of those reels.

Even if the reels are not contiguous, winning combos are produced on all active lines (special symbols form combinations scattered on their lines).

If you use another 3+ scatters to retrigger the free spins, you’ll get an extra 10 spins as well as an additional special symbol. With enough retriggers of this feature, any symbol can become special.

The Book genre may have provided inspiration for the game’s mechanics, but the slot’s design makes no reference of it. You’re looking at a traditional Ancient Rome design with extremely detailed graphics. It’s one of the more current games in this category, and I really enjoy it. We have gladiators in the reels and spectators in the stands because the action appears to be set in a Coliseum.

The first five symbols will be the 10 through Ace Royals, which will have a lower value. For the premium symbols, we see a mix of Roman soldiers, officers, and a gladiator. The lone feature symbol, both wild and scatter, is the Roman Eagle.

Legacy of Rome is a Book-style slot that doesn’t provide much beyond the old mechanics that we’ve all come to know and love. Still, if you enjoy that genre but are bored of Ancient Egypt-themed games, this one might be a good alternative. Just be aware of the lower-than-average RTP.